Overdue Time For Change For The ‘Dark-Skinned Girl’ Narrative

Black British twitter and now popular media has been awash with jalapeño-temperature heat focussed on colourism. Aside from the news about Arsenal football club’s long-standing manager stepping down, there was little else heating keyboards way into the wee hours.

Colourism; that lingering by-product of the African slave trade where through the brutality of rape, the resulting offspring from African women would be categorised like cattle into disgusting descriptive terminology such as ‘mulatto’,  ‘quadroon’, and ‘octoroon’. This stratification was a measurement of the quantities of ‘black blood’ which separated Africans from white Europeans. Of course, these children mostly received ‘better’ treatment from all.

Today it’s remnants form an ideology determining what is acceptable in relation to human attractiveness. The idea that the closer a non-white woman is to white beauty standards (and it is mainly women who’re judged by this standard) the better her ability to access the rewards allocated to her in society. Beauty as a commodity allows one to trade in the market for employment, careers, marriage, education, wealth and success. These spheres in society when successfully bargained, determine one’s longevity in the world. It follows then that dark-skinned black women ergo, girls, will have the hardest battles navigating a world which deems them the least beautiful.

Of Somali-Swedish descent, Maya Indea Jama is a radio and television presenter (so far as is now known) on platforms to include the BBC, appearing on ITV’s Loose Women and is currently in a marketing campaign for the giant cosmetics brand Maybelline. Adding to those plum positions is the current role of girlfriend of Grime artist, Stormzy. Her rise in popularity, fame and lucrative deals has been…interesting.

Maya (ironically named after the titan that is Maya Angelou) has had her twitter account scrutinised (by whom we know not) to reveal a series of tweets (from 2012) that contribute to the hostile society in which dark-skinned black women ergo, girls have to navigate every day of their lives. Whether these social media ‘slips’ were written 6 minutes or 6 years ago, or when Ms Jama was ‘much younger’ (thus infantilizing Ms Jama as a means of assuaging her public persona), the tweets still perpetuate a rancid world in which, at the very least, contradicts the ethos of her current contract with Maybelline. Clearly using Jama’s standpoint, we’re not all ‘born with it’.

Whatever her age when tweeted, the platform, (erm, the Internet) on which she used to disseminate lies could also be used as a research tool to at the very least, realise the barbaric history behind the denigration of dark-skinned black women ergo, girls…if she, or anyone else, wanted to.

We’re not going to go into the specifics of the tweets, they’re writ large all over twitter and in tabloid newspapers (doesn’t her PR, if she has one, know that the Internet never sleeps?) If all the offending items have not yet been deleted, they can be found in a myriad screen-shots, where the only place you might not find them is Myspace!

When we debuted last November our largest Theme was titled ‘Who Do You Think You Are?!’, indeed the number of submissions 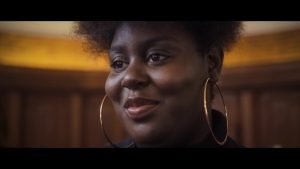 were such that we had two separate programmes to contain all the productions about identity constructions, beauty dynamics and the stifling of creativity via the physical self. These incredible Themes included gems such as Pretty For A Darkskin, directed by Latifah Damali; I Am The Black Woman, directed by Jeffrey Emile; 50 Shades Of Melanin, directed Naomi Grant and by You, directed by Rebecca Coley and sung by Sharlene-Monique.

Naomi Grant’s latest thing of beauty comes in the form of Future First which unapologetically embraces the wonder of the differing tones of black women and their natural, god given crowns of black, silky, woollen hair, who’re unafraid to claim their space in the world.

The latest in British film’s discussion about colourism comes from Clare Anyiam Osigwe in her film No Shade. Clare said of making the film,

“…it was more of a love letter to black women, a tool to have a dialogue with black men and all people of colour. It’s a chance for healing: a moment of clarity and a chance to educate and change the discourse of ‘blackness’ in the UK”.

You can read our full interview with Clare from here: No Shade’s Love Letter To Black Women Penned By Film Director Clare Anyiam osigwe.

How Do Black Women Position Themselves In A Changing Broadcast Environment? What Is Broadcast Today? Panel Discussion Begins To Find Ways